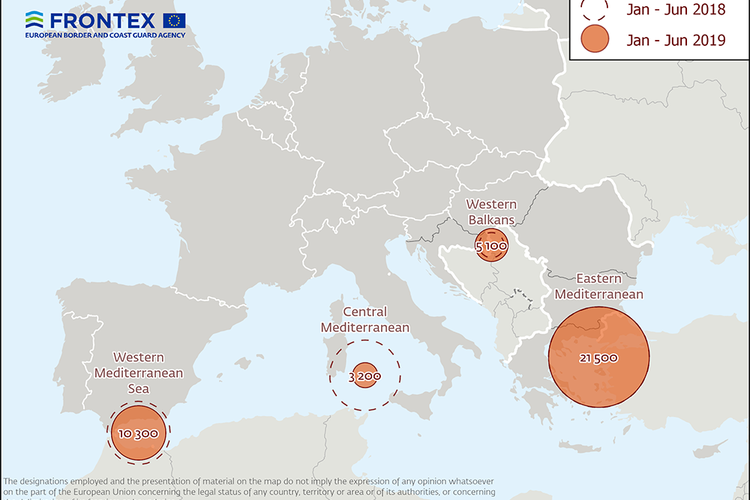 In June, the number of detections of illegal border crossings on Europe’s main migratory routes rose 6% from the previous month to around 8 300. The total for the first half of 2019 was nearly a third lower than a year ago at around 42 000.

However, in the first six months of this year, the total number of detections in this region was down 16% from a year ago to close to 21 500.

One out of four migrants detected on this route were nationals of Afghanistan, usually arriving by sea.

The total for the January-June period stood at more than 10 300, 27% less than in the same period of last year.

Nationals of Morocco, Mali and Algeria accounted for the largest number of detected migrants on this route in the first six months of 2019.

Tunisians, Pakistanis and Algerians were the most represented nationalities on this route in the January-June period.

Western Balkans
There were nearly 500 detections illegal border crossings recorded on this route in June. The total for the first six months reached nearly 5 100 or double the figure from a year ago.

Nationals of Afghanistan and Iran accounted for the largest share of migrants detected on this route.

*June 2019 data does not include the number of detections in Cyprus.